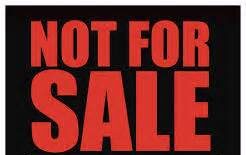 Business Strategy Built for Sale or Succession – Does It Matter?

It’s obvious that everything is for sale given the right price. If I said that selling businesses is a big business then that would be an understatement. There are literally hundreds of businesses that make money selling other businesses. This means there must be a lot of businesses that are being sold. My interaction with other owners is that there are many that run their business with the intention of selling. This made me think. I wondered if the people that built for the sole purpose of selling it ran their business differently than those that built for succession.

One of the things that I have noticed about businesses that are built for sale is that they start off aggressively growing their business. They invest heavily for a period of time; they grow exponentially during this period of heavy investment, which eventually brings them to a plateau in terms of size. At this plateau the ones that are built for sale curtail their investment to the point where investment in the business is kept at a minimum. They only buy to replace worn out equipment or if they are forced to by a customer. Many times they will not buy anything. They become what they call in car sales – “Tire Kickers!” These “Tire Kickers” do not invest in their business in order to maximize the amount of cash that their business can yield. The purpose of this is to show in the short term a very profitable company which entices other people or companies to buy them. The lack of ongoing investment will eventually cause the profitability and prospects for the future to decrease. Built for sale companies also stop investing in their people to increase short term profitability. Employees in the companies see this and begin to develop a negative outlook. This can lead to further productivity issues in the future.

A business that is built for succession is one that is continuously investing in itself and its employees. This investment is seen in the acquisition of equipment which gives these companies expanded capacity and capability. The investment will also include a commitment to the training of employees to ensure a skilled workforce in the future. A built for succession business does not try to enhance its short term profitability by stopping the investment critical to its future success. It maintains an ongoing momentum which ensures the future viability of the company. Employees see this and it makes them feel that their future is more secure. They see an active future in a company built for succession more than a company built for sale. When employees see this they want to remain with the company and participate in its future.